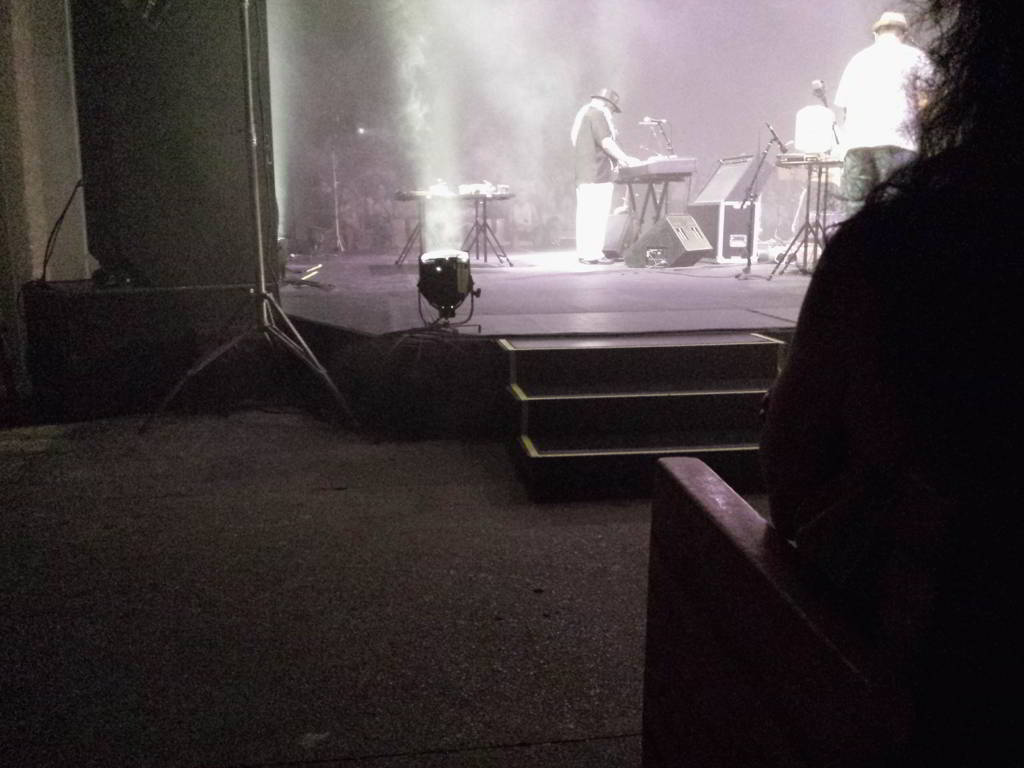 This article was commissioned and subsequently published in 2013 for El Ciudadano in print and on its website. Updated in 2020 with images and style corrections. The photographs belong to a concert in 2013, in Brazil, by Emerson Marques Pedro (CC BY-NC-SA 2.0).

Hermeto Pascoal, a musician and multi-instrumentalist, performed with Aline Morena at the El Círculo Theatre and reviewed his enormous recording background. We talked by phone before his arrival in Rosario, with the renowned artist, who received compliments even from Miles Davis, while he was waiting at a Chilean airport for a flight that would take him to Bahía Blanca where he gave the first of his concerts on Argentine land.

On the other side of the line there is a rather particular couple, the first one in question is an experienced and unclassifiable artist capable of bringing out harmonious and melodious sounds from a teapot.

The first question about who Hermeto Pascoal was was answered as follows: “He is a musician who loves music and likes to play anywhere in the world”. He also said that he relates to it in a very particular way, something that should be a constant throughout the world. “I make music since I was born, every day of my life, at this very moment I am composing a song so that when I get there (Argentina) I can present it to everyone who can go to the show, I take it very fresh, so that they can enjoy it”.

About what he understands by music, Hermeto’s answer sounded like the blow of a saucer. “It’s the reason of my life, the communication with the audience is wonderful. Music is pure therapy and healing regardless of the religion one professes. When I was born, in 1936, I felt that I had to make music, my cry was my first song, coming to this world that can be very hard but worth living”.

Pascoal’s work is unclassifiable, free of labels and nomenclature, so unmanageable that he plays a great number of instruments and has the ability to perform practically anything in front of him, to tear out the most incredible melodies from the very bowels of the steel, to create sonorities from kitchen utensils, electrical appliances, elements of daily use, also from percussion objects, stringed and wind instruments; nothing, within reach of him, is left out of the magic that the musician imprints on him to obtain melodies.

About the emotions he gets from touching objects, the Brazilian artist said: “I’m happier and happier, I feel fullness, so I’m taking life forward. When we are born we step on the first step of the infinite ladder of life. And it is beautiful to play while I am climbing the steps in the life of sound”.

Of Landscapes and Texture 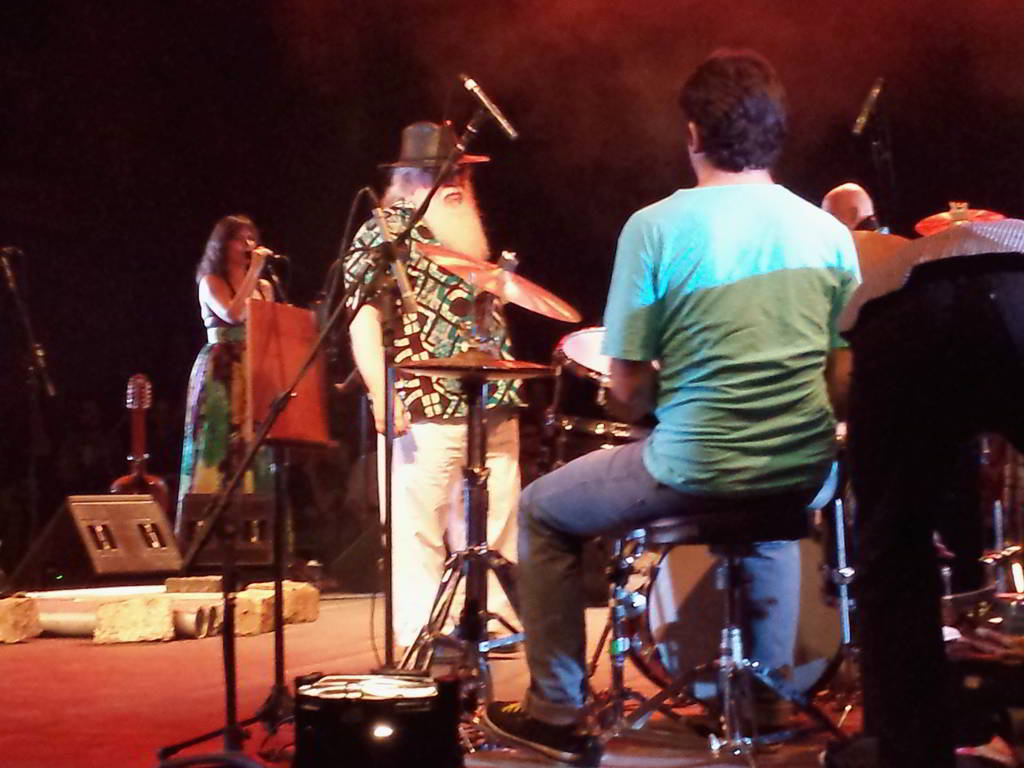 Those who have delved into Pascoal’s work will recognize key sonorities in his pieces, some of which have blurred boundaries between the concrete and the experimental. Pascoal not only works with the conventional sounds that structure what is called “music” but goes beyond that, approaching his work with landscapes and sound textures, recording sounds from nature, the countryside, the city. His relationship with these is surprising. “Hail Mary! I was born in Arapiraca, Lagoa da Canoa, in the state of Alagoas, Brazil. Until I was 14, I lived in the interior where there was no electricity, I was alone with the sounds of water, of nature, of the town,” he said. There he learned to play the eight-bass bandoneon that belonged to his father, and then at age 11 he managed to replace it in the peasant festivities by playing forró, a Brazilian folk rhythm. Also, during those years, he learned to play the tambourine and flute, all in a self-taught way. “At the age of fourteen I went to Pernambuco, in Recife, where I started to get to know the big cities. I call the music we make Universal Music”.

Listening is cultural. It is known, then, that it is always directed and veiled by certain interests; in the media what responds to certain interests is always promoted. On whether conscious listening should be promoted more, a listening that moves away from unidirectionality without discernment, Hermeto affirms the following: “I never put knowledge before my way of feeling, all my emotions come first. I like to feel first and think later. First I listen to the sounds, the ideas, I invent songs with images, and I try to develop that. There are so many things that are difficult to explain, because sounds are sensations. They are sounds that I hear as words, images, sometimes I see myself riding or swimming, I think about all that when I’m composing, the feeling, the emotions come first.

About the creative process and improvisation, the musician said: “I have four formations, I play with a group, then the Hermeto Pascoal Duet, a symphony and a Big Band. With all of them, when we arrive on stage to make our music, we have no repertoire prepared. There’s no order or anything like that, it all goes together, we improvise and feel at home.

Everything is good when it sounds

Hermeto draws sounds from any element that can be executed: “They are sounds without premeditation, improvised, even I can’t believe the sounds I achieve, now I’m playing with a kettle of water. I let the teapot flow and its music come out, free, something very different and unexpected. I let the surprises start from whoever plays the music with the teapot and whoever receives it as well.

“My days are never the same, I think it is important to live in the present and, particularly, I never remember what I did yesterday. It is important to live now, the day before is already in me, it has already passed, and especially, I am interested in today. I like travelling a lot and being at the airport now, talking to you, I’m already thinking about a new song. A song that shows me all the beautiful things that happen to me now, it always happens like that, very naturally and without programming, I enjoy listening to music and also thinking about it”, he described.

“I had a nice dream with which I later made a song, many times this situation happens to me, that dreams become songs”, says Hermeto and starts singing along with Aline Morena who is next to him. After singing a cappella for a minute and making sounds with some object that he had in his hands, Pascoal put Morena on the phone and she told how it was her meeting with the artist: “We met 10 years ago in a workshop that Hermeto gave in Londrina, in the north of the state of Paraná, I went to play something with him and then he invited me to participate in the group. At that time, I belonged to Hermeto’s fan club. He loved my voice; when he finished he asked where I was and that’s how we met. That’s how we started to do a show together. That’s how we are together to this day.

Aline also points out: “I want to continue finding my way, like all the musicians who are with Hermeto, he makes each one get the best of himself, and I always liked to dance, so I’m also doing body percussion with him. I started playing piano, caipira guitar, percussion and I want to keep finding my way in music. I want to discover myself more in that sound, and I like to vary with them. I used to sing in a folk group and I always liked the mix of genres. I loved Hermeto’s music because it’s the most mixed of all.

In the distance, as if he had moved away from the telephone handset, you can hear Hermeto’s voice pointing out that Rosario’s “is going to be a great show, everyone should go with their throats well tuned and ready to sing: we are going to exchange a lot of energy, a lot of joy leaving a lot of hope for this world and some perhaps a little strange sounds”. 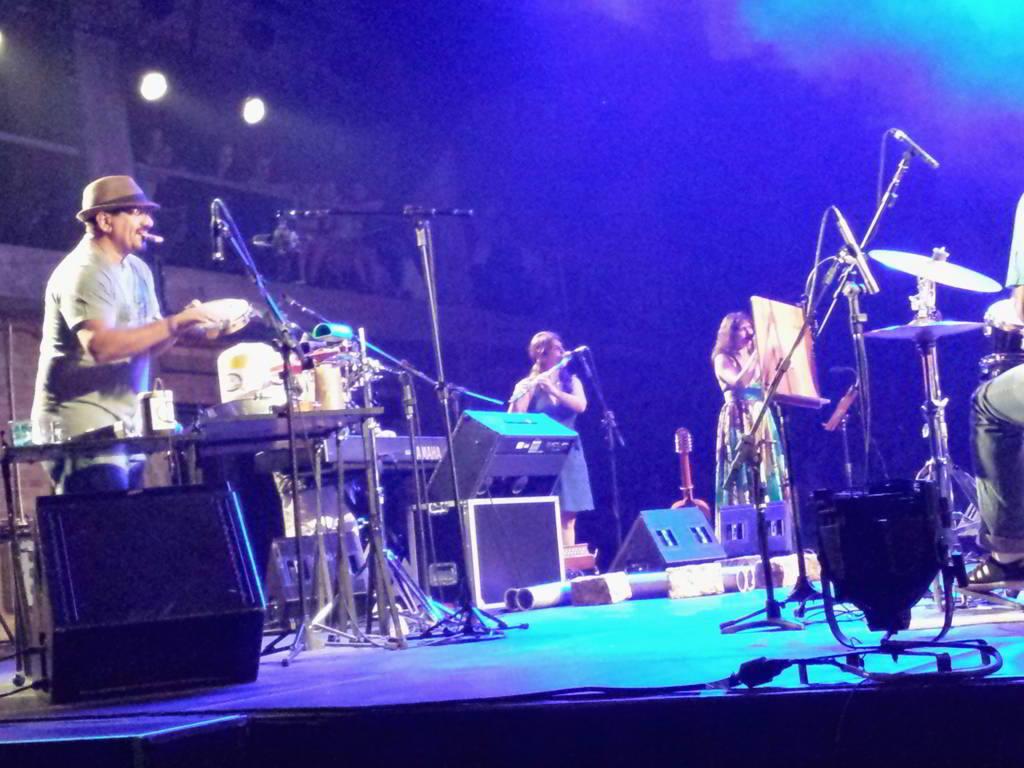 For some years now, Hermeto Pascoal has been sharing his life with Aline Morena, who is a member of one of the groups he goes out with to make his presentations. In the duo with Aline, she also plays several instruments: the caipira guitar, percussion and also dances. Pascoal illustrates: “Once we played in a pool with water inside, she played with her hands and I played several instruments together. Imagine that in the box with the audience, people react and do very well. Sometimes I see that Aline is dancing to the music I am making, it is something wonderful and when I see it, I am even more surprised. When all this happens in the duo, it seems to me that the important thing is to create without stopping, I also see that the duo has more instruments than people. Aline is a musical and life partner”, humorously states the Brazilian musician.

If you like, you can listen to it here at The NOISE is the Message.